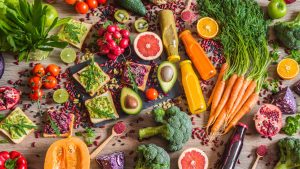 Depression is debilitating. It is a dreadful feeling and is becoming more and more common in today’s highly stressed society. The good news is that depression IS controllable! While there are many factors that affect mood, food is one of the most often overlooked. This article outlines some of the most common foods that may help with depression as well as some that you should avoid.

Depression ranges in severity but in general involves low mood and/or loss of interest and pleasure in usual activities, as well as other symptoms. The symptoms are experienced most days and last for at least two weeks. Symptoms of depression interfere with all areas of a person’s life, including work and social relationships. Depression can be described as mild, moderate or severe; melancholic or psychotic. Some of the symptoms include:

Thoughts such as “I’m a failure, I’m worthless, “things will never change”, “Life’s not worth living”, “There is nothing good in my life”, etc.

Behaviours such as: withdrawing from close family and friends, stopping usual activities or going out, rely on alcohol or sedatives, not getting work done.

Physical symptoms such as: being tired all the time, feeling sick and ‘run down’, frequent headaches, stomach or muscle pains, churning gut, sleep problems, loss of appetite, significant weight loss or gain.

Medication, mindfulness, counselling, diet and exercise are all great resources to aid depression. Here I provide some tips on how what you eat (and do not eat) may help however please seek professional help if you believe you are suffering from depression.

There are foods that help depression, but just as important is making sure that you’re not eating foods that contribute to depression,

So there you have it. While food may not be the cure it will definitely contribute to your feelings of depression of sadness and something everyone can implement today!

For more information or a consultation with Kasey (Nutritionist), please contact us to arrange an appointment. Don’t forget Kasey is offering 20% off her personalised 5 week food programs during September 2019! So BOOK NOW!